From the time he first stepped on the turf at Steubenville’s Harding Stadium as an unheralded freshman for Coach Howard Brinker, there was little doubt that Calvin Jones was special as both an athlete and dominate personality for the Big Red Machine.

When Brinker, a graduate of Miami University, moved on to a 24-year career as an assistant to Paul Brown with both the Cleveland and Cincinnati teams of the National Football League, he didn’t exactly leave the cupboard bare for new coach Ray Hoyman.

The rookie mentor inherited not one but four individuals, who would one day make their presence known in the professional ranks, including junior Perry Jeter, a future kick return specialist with the Chicago Bears, following a career at California Poly, along with three sophomores: Eddie Vincent, Frank Gilliam and Jones.

As the story goes, after a stellar high school career Jones would be recruited by Ohio State Coach Woody Hayes, but when Vincent and Gilliam stopped to say goodbye to their 1952 classmate Jones before they departed for the University of Iowa, the future Outland Trophy recipient jumped in the car with them, and they were off to play for Coach Forest Evashevski and the Hawkeyes.

The three, who were often referred to as “The Steubenville Trio” at Iowa, also had played on the Big Red basketball team in 1952 and had defeated an impressive Wellsville team, led by Bevo Francis, in the sectional finals on their way to becoming state runner-ups to perennial champions Middletown.

Jones went on to become the only three-time, first-team All-American in the history of Iowa football and was the first African American on the cover of Sports Illustrated on September 27, 1954. He was named to the Iowa Sports Hall of Fame in 1971 and the College Football Hall of Fame in 1980.

His battles with future NFL great Jim Parker at Ohio State were classics. Parker, one year younger than Jones, was recruited by Woody Hayes out of Toledo Scott High School and in 1956 followed  It has been said that neither man could gain an advantage when matched up across the line of scrimmage, but neither was willing to give in to the other, even after the whistle had blown.

The street where Steubenville High School’s Harding Stadium is located is named in Calvin Jones’ honor.

Ironically, Calvin’s grandson, Edwin Harrison, currently plays for the Calgary Stampeders of the Canadian Football League. His search to learn more about the life and death of his grandfather and his family history is at the center of the 2012 documentary The Crash of Flight 810, part of TSN’s Engraved on a Nation series of eight documentaries celebrating the 100th Grey Cup. 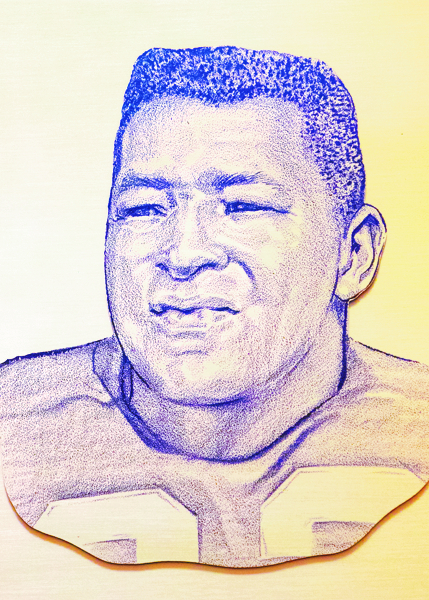