Rudolph W. Giuliani, 107th Mayor of New York City (1993-2001), was born in 1944 in Brooklyn, New York.  As the grandson of Italian immigrants, he was taught the value of a strong work ethic and a deep respect for America’s ideal of equal opportunity.  He attended Bishop Loughlin Memorial High School, Manhattan College, and New York University Law School.

After joining the office of the United States Attorney for the Southern District of New York, Rudy Giuliani rose quickly through the ranks, becoming the Chief of the Narcotics Unit at age 29.

In 1993, Rudy Giuliani was elected Mayor of the City of New York.  Campaigning on the slogan “One City, One Standard,” he focused on reducing crime, reforming welfare, and improving the quality of life.  In 1997, he was re-elected with 57% of the vote in a city in which Democrats outnumbered Republicans five to one.

Under Mayor Giuliani's leadership, overall crime was cut by 56%, murder was cut by 66%, and New York City – once considered the crime capital of the country – became the safest large city in America according to the FBI.  New York City's law enforcement strategy has become a model for other cities around the world.  This is particularly true of the CompStat statistical accountability program, which won the 1996 Innovations in Government Award from the Kennedy School of Government at Harvard University.

When Mayor Giuliani took office, one of every seven New Yorkers was on welfare.  Mayor Giuliani implemented the largest and most successful welfare-to-work initiative in the country, turning welfare offices into Job Centers and reduced welfare rolls by 640,000 – nearly 60%.

On September 11, 2001, America suffered the worst attack in its history when terrorists crashed planes into the Twin Towers of the World Trade Center.  Thousands of New Yorkers were killed, including hundreds of members of the city's uniformed services, who rushed to the scene to lead the heroic rescue of tens of thousands of people. Having narrowly missed being crushed when the Towers fell, Mayor Giuliani immediately began leading the recovery of the city as it faced its darkest hour. Mayor Giuliani was widely lauded for his steady hand during challenging times. He was named “Person of the Year” by TIME magazine, knighted by the Queen of England, dubbed “Rudy the Rock” by French President Jacques Chirac, and former first lady Nancy Reagan presented him with the Ronald Reagan Presidential Freedom Award.

Limited by New York City law to two terms as mayor, Rudy Giuliani founded Giuliani Partners in January, 2002, quickly establishing the professional services firm as a leader in emergency preparedness, public safety, leadership during crises, and financial management. Drawing on his experience in turning a city described as ungovernable into a city that is now a worldwide example of good government and effective management, Giuliani was recognized in Spring 2002 as “Consultant of the Year” by Consulting magazine. Mayor Giuliani is also a Partner in the law firm of Bracewell & Giuliani LLP.  Bracewell & Giuliani is a major international law firm with over 400 lawyers, serving mainly clients in the energy and financial service industries. 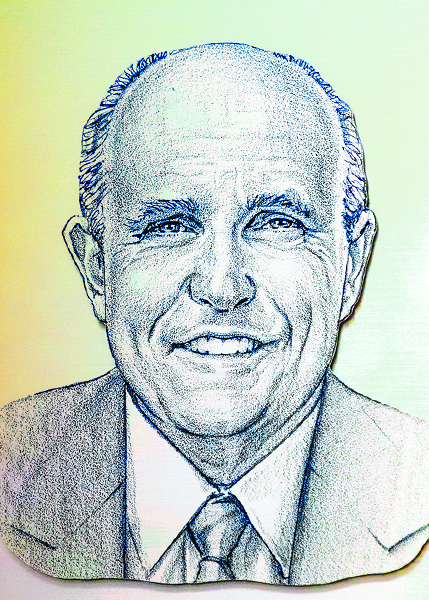