No family could possibly embody the spirit of the Lou Holtz Upper Ohio Valley Family Heritage Award as much as the Lomba Family of East Liverpool. Inspired by their mother, Juanita McCune Lomba, a native of Wellsville, and their father, Joseph, who was recruited in 1936 by Midland’s Crucible Steel Company, along with many of his fellow Portuguese citizens to come to America, the family forged a new life in the East End Section of the Pottery City and, as the story goes, the rest is history.

To the union of Joseph and Juanita, two daughters were born, Melanie and LaVonne, both going from their East Liverpool High School graduation to continue their educations. For LaVonne, it would be off to Kent State University, while Melanie was graduated from what is now known as the David N. Myers College in Cleveland.

Lavonne received a bachelor’s of science degree in special education from KSU followed by, not one, but a pair of master’s degrees, one from Case Western University in Cleveland and the second from California-Pacific, each in the field of clinical psychology and social work. These were followed by a Ph.D. in psychology at Cal-Pacific.

It was, however, while students at the Horace Mann and Garfield Schools in the East Liverpool system, that the Lomba sisters came up with the idea at an early age, when they realized that children with special needs deserved to have school in a facility where they could reach their full potential by having a dedicated, qualified staff that could address both the academic needs as well as the special needs of each child.

Together, as a joint family effort, the sisters with the help of their mother, opened the La Mel Children Center on Bush Street in San Francisco in 1973, which became nationally accredited as a medical facility by the Joint Commission on Accreditation of Hospitals. The center was also licensed by the California Department of Education as an alternate education agency with the authority to grant high school diplomas.

Many of the children treated by the Lombas over the years were from military families and suffered from trauma. Other students had learning disabilities, severe behavioral disorders or experienced cultural conflicts.

Of interest, La Mel enrolled children with autism at a time when this disability was barely understood and clear methods had not been developed to treat the behavior. At its peak, LaMel served grades K thru 12 with a staff of 25 teachers, administrators and custodial employees.

Both parents were good role models, clearly stated in a recent interview for San Francisco’s Richmond ReView. They emphasized, in the words of LaVonne and Melanie, “Talent de Bien Faire” translated to mean, “The Will to Do Good.”

Such a philosophy guided the sisters, both professionally and in community service throughout the years, For Melanie it would mean involvement with the San Francisco Homeless Association, the California League for the Blind, Aid to Retarded Citizens and Special Olympics.

LaVonne, equally involved, became a member of the advisory board of the San Francisco State University Department of Education’s Alumni Association and was the first person in California to receive certification as an organizational therapist.

The sisters, along with Melanie’s husband, Russell, have traveled extensively around the world, but proudly proclaim, there is no place like the Ohio Valley. 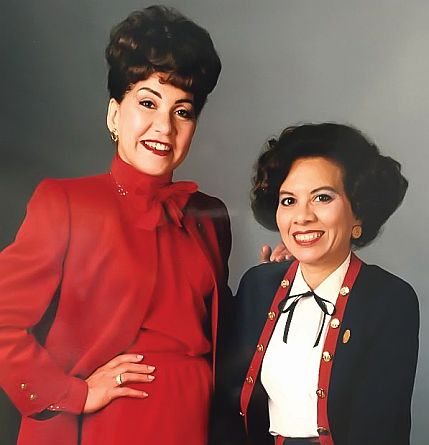